It’s funny to me that people are calling Camila Cabello racist for using the N-word in the past. I think she was caught using it more than once. Well, she probably grew up with it so it wouldn’t shock me if she used it regularly. I hope she has learned and doesn’t use that word anymore. She is a public figure after all. Anyway, everyone is racist. Accept it. Move on. I still listen to her music like people still watch Woody Allen movies. It does affect my feelings toward her a little. But then I remember that everyone is prejudiced. She just got caught.

If people only knew how their favorite celebrities really are. That would really be something. Eric Clapton recently admitted he was racist for years! Good for him for admitting it. I just find it interesting what people choose to focus on.

I have a new baby coming tomorrow!  Well, it’s supposed to come tomorrow. It’s still in Hong Kong right now, but tracking swears it’s coming tomorrow. Oh, never mind. Just checked. It is now in Ohio!! Woohoo! I don’t know why I’m so excited. It’s not like I’m really getting it tomorrow. It is going to my mom’s house. I probably won’t get it until Sunday.  Here is a pic: 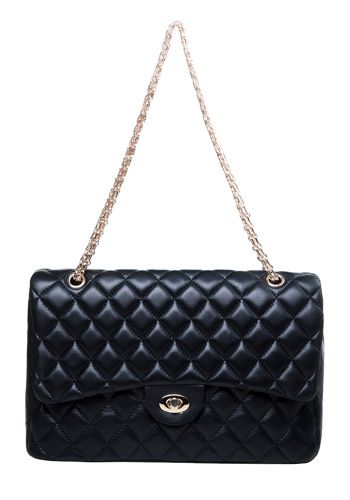 Obviously, it’s not a Chanel. I wish. I have yearned for a Chanel Jumbo bag (retails at about $5500) for a decade. The bag I’m getting is a Chanel inspired bag. It didn’t cost as much as one would think for a lambskin leather bag. The days of me paying $250+ for a purse are over…until I get my Chanel. That is the one bag I am willing to spend a ton on. I will probably buy a house before I get my Chanel. So the wait will be long. LOL.

I forgot to mention that this bag has been sold out FOREVER. I’ve been waiting for about a year for this bag. One day last week I checked the site and there it was…even though I told the company to email me when this bag came back in stock. No email. I would think that they would want people to know when the bag was back since so many people wanted it.

The bag is huge like the Chanel Jumbo. I love big purses. I like to be able to carry anything and everything if I choose.  Here is a pic of a person carrying the bag to show the size: 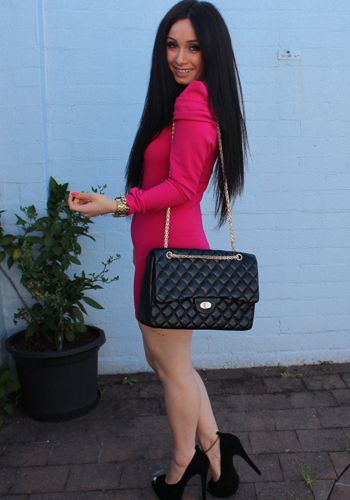 What else? Work is crazy. As of this week, I’m spending more time in training than doing my old work. Doing the new stuff is overwhelming. Tomorrow we will be on display. We have to work through the new process while the others watch. No pressure at all.

What is pressure is the meeting with my manager and the 4 other people in the group. My manager made some snarky comments about some of us not saying anything. It’s hilarious to me when people say that because what if the person really doesn’t have anything to say? I don’t talk unless I have something to say. I have always been this way. I don’t think I should be punished for that. I can’t really say more. I have probably said too much. My point is that during last’s week meeting, I truly had nothing to add. Nothing. Was I just supposed to make up something? That wouldn’t have gone well because it wouldn’t have made sense.

Oh well, I hope the meeting we have with our manager on Thursday goes better. No snark!  I might have something to say since we are really getting into the new stuff. But as of right now, nothing comes to mind. I have no complaints about the trainer . I knew this was going to be hard. I’ve been working extra hours (not with pay) to ensure I really get this shit down. I do feel a ton of pressure because I was part of the chosen few to be trained. Should I bring this up at the meeting? I’m sure that would go over well. LOL.

I’ve gotta go. I’m going to work on training stuff for an hour or so. I have some notes written and some stuff typed out. I probably should type everything because it is easier to find things in typed documents. I think I’ll use my Mac for this. He could use some love since I’m still using my HP for most things.