A pic of my dog from one of our daily visits to the park. It wasn’t this week because this week was rainy. (We still went to the park every damn day, though. ha!) 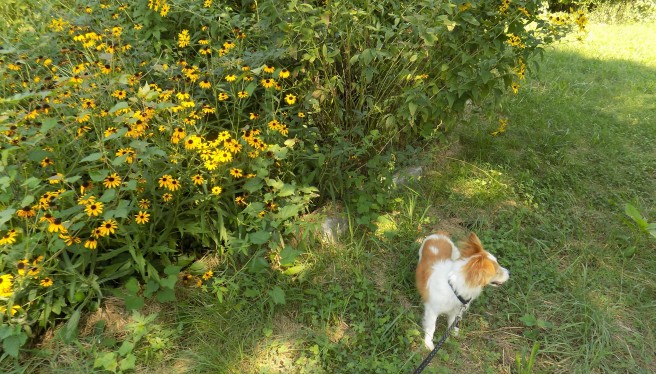 He hates having his pic taken which makes it hard to get good pics, but oh well.

I just finished splitting a few of my Abilify pills in half. I do it in advance, so I don’t have to do it daily. I guess that means I won’t be quitting within the next two weeks. I feel this undercurrent of depression in me. I’m scared as hell to stop Abilify right now. I would rather stop when I’m not feeling any kind of sadness or overwhelmed.

I’ve been going on and on about Harvey Weinstein in this blog. I was a big fan of Miramax and The Weinstein Company, so this is a huge story to me. I’ve always known he was a jerk, but I didn’t know about the harassment. I just want to say that I know he isn’t the only one in Hollywood sexually harassing people. Also, I know it happens in other industries.

Quick stalker update: I haven’t seen him on his moped all week. That is probably because I was able to go to the park at 11:30 instead of after I got off from work. The week isn’t over…

I didn’t expect to like the new Shania. I must admit that I thought she was over once her ex-husband stopped writing with her. (How sexist!) But her new album is decent.

Big Little Lies is so good! Reese Witherspoon kills it. Everyone is good. Don’t watch season one of BLL and think the book is good. It’s not. Don’t bother. I might be a little bitter because I spent $8 on the Kindle edition of the book. Ugh. What a waste. Anyhow, I can’t wait for season 2. I don’t have HBO, so I don’t know when I’ll be able to see it. I might get the digital version or DVD. So good (when compared to the book).

Movie of the week: I saw Hidden Figures. Very good movie. It’s based on a true story. Janelle Monae is really something. Once again, everyone was good in it. I would recommend this movie to everyone. It was better than Big Little Lies. lol.

Podcast of the week: True Crime Garage. Love that podcast. I usually listen to at least two different podcasts a week. I will start listing those in this section. I’m obsessed with true crime. I can’t get enough of it. I went through a period where I only read true crime.

Books of the week: Ugh, I’m so disappointed. There’s no way I can finish the Vietnam book in less than 2 weeks. 😦 I will still probably read it over the weekend, but then I’ll stop because it is just wasting time to try to read a book I know I’m not going to finish. I hope they put the PBS special the book is based on on Netflix, or maybe I can catch it on PBS. I think it was on over the weekend. I would just buy the book, but at last check, it was $25. I’m not spending that much on a Kindle book.

I have more library books I could read, but now I’m just trying to finish The Handmaid’s Tale. I always get a bunch of library books at one time. ugh. Too many books, not enough time.

Planner update: Plans of the week in my Erin Condren 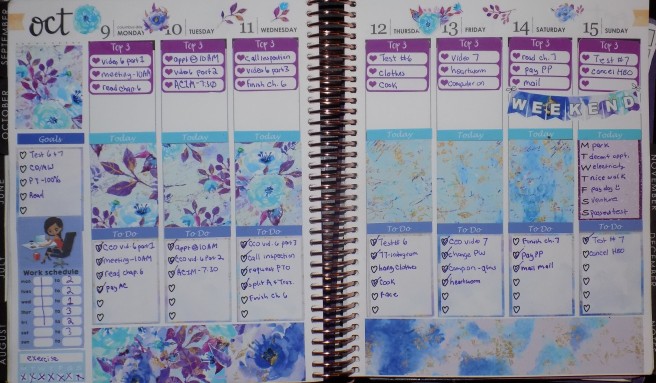 Plans for the Weekend: Staying in for the most part. I have to mail one thing. I don’t even have to go inside the post office. yay. I rarely get to stay in all weekend. I’m going to work at my part-time job and work on my school course.

This week off was pretty good. Only one bad thing happened: I lost power for almost 5 hours on Wednesday morning. I could’ve worked at my part-time job. I lost 5 whole hours! I would like to think I’m over it now, but I dunno. 😉 I had everything all planned out and then that happened.

Have an amazing weekend. Thanks for reading! 🙂