Work is killing me. Both jobs. Sigh. I didn’t realize Monday is Labor Day. I will be working at my part-time job. But I do get a day off from the FT job. I’m auditing work (re part-time job) which is great experience if I knew what the hell I was doing. I’m waiting for feedback on the work I did this week. I’m so scared. I might request a one on one session because I feel lost.

I see my psychiatrist on the 13th. I see him 4 times a year. I really want to get off Abilify. It causes impulsive behavior. Some people have lost many things due to that drug (due to gambling addiction etc.), but IT WORKS. I’m not depressed. I’m not in bed all the time. However, the side effect of impulsive behavior can ruin lives.

I used to be so different. I was frugal before I was on Abilify. I don’t remember when my eating habits changed, but I’m sure Abilify made me more impulsive. Before being on the drug, I wouldn’t even think of ordering food. Now I think about it 1 – 3 a week. I don’t order out that much (thank the Universe), but I THINK about it.

Depression sucks. I wish I could just be depressed, but it affects my work. Depression affects everything. If I didn’t have to work, I would just stay in bed all day with no Abilify. I know that sounds strange. That is how bad I want to get off the drug, but I can’t allow anything to mess with my productivity. So Abilify it is for now.

Wow, I just found out Louise Hay passed away peacefully in her sleep on August 30th. She was 90 years old. She’s the one who got me started on this long and sometimes painful spiritual journey. Thank you, Louise Hay. RIP.

Joan Osborne did an album of Bob Dylan covers. It just came out today. It’s awesome. I have been missing that passion in her voice. It reminds me of the old Joan Osborne. However, I wish she did a cover of Nina Simone songs. That I would KILL for. I need someone I like to do a cover of Nina’s songs. Alicia Keys is a big fan of hers. She should do it.

TV of the week: Big Brother, The Real Housewives of NYC

Movie of the week: None

Books of the week: I finished A Beautiful, Terrible Thing: A Memoir of Marriage and Betrayal by Jen Waite. It was good, but it took me until the very end to figure out why she wrote the book. I kept saying, “This is a great memoir, but what’s her point?” It isn’t revealed until the end.

Planner update: Plans of the week in my Erin Condren 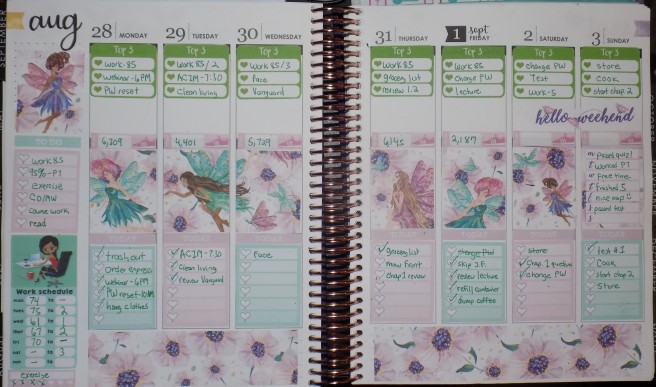 Plans for the Weekend: Mowing the lawn, grocery shopping, school work, and working. Fun times. I’m taking my test early tomorrow morning (7-ish) and then I’m working for the rest of the day. Hopefully. I still have to get feedback before I work more. If I can’t work, I’ll do school work and clean.

On Sunday, I’m grocery shopping. And on Monday, I’m mowing the lawn. I don’t know how much I’ll get to work. If it were up to me, I would work all weekend. But at least I get to do school work if I can’t work as much as I want.

Have a nice weekend! Thanks for reading. 🙂