Uh, oh changes are coming at work (FT job). In a couple of months, I’m pretty sure they will need fewer people. Maybe this is when my part-time job experience will come in. Except I only started in September. Most jobs require a minimum of 1-year experience. I’m just not going to worry too much about it now. As long as I have my PT job, I feel like I have options. I’m not freaking out as much as I normally would.

It looks like my check for October will be a little over $300 (PT job). Monday is the last day of the month, so I still have time. I will work all day on Saturday and Sunday. My certification course is on a back burner for the next two weeks. I might try to sneak a little course work in if I’m sick of working. Btw, I have definitely done more than $300 of work, but that’s the way it goes. I’m a newbie. I’m supposed to be making $1,000 a month.

When people talk about being excited for Xmas, I just want to scream. It’s the same for people who LOVE the cold. ugh. So annoying. Yes, I hate the holidays, and I hate the cold, so the upcoming time of year sucks for me.  Speaking of the weather, it is going to be 82 degrees on Sunday. Not bad for the end of October. I’ve always hated the cold, but the cold for me is especially bad these days. I don’t have water when it gets really cold. My electric bill is around $270 a month during the winter. I could go on.

I’m so jealous of the millions of people that can vote early. I see some of these people still have to stand in long lines so I shouldn’t be that envious. I should have voted absentee and used my “severe anxiety” as the reason. They would have let me done that, but I would feel weird about it. Anyhow, I didn’t think the lines would be long because I thought people hated Trump and Clinton.

So excited for the Miranda Lambert double CD coming out in November! 🙂

TV of the week:  Survivor, The Divorce, basketball

I have free HBO until the end of the year, so I tried The Divorce starring Sarah Jessica Parker. I didn’t enjoy it. I watched two episodes.

Movie of the week: none

Books of the week: The Things We Wish Were True by Marybeth Mayhew Whalen and Ashley Bell by Dean Koontz

I don’t have time to read right now, so I don’t know why I downloaded the Dean Koontz book from the library. I used to love Dean Koontz. I haven’t read a book of his in a decade.

Planner update:  Plans of the week in my Erin Condren life planner: 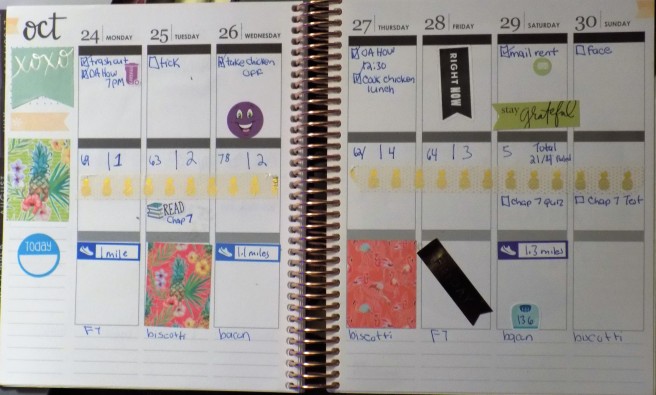 Plans for the Weekend: I sound like a broken record, but I’m just working this weekend. I do have to go to the post office on Saturday. These next two weeks will be very busy, and then I have 3 days off from my full-time job in mid-November.  I have a lot of time off coming up because our company changed its time off policy, so I have about 6 days off during November and December (not counting holidays).

Have a nice weekend!

View all posts by Lindz