I haven’t had soda in 48 hours so excuse me for being off. I stopped cold turkey just like I did last time. ( I only started back up a few months ago because coffee was making me really sick). Now I have no caffeine. Well I’m still drinking tea…at least until that runs out. Is there really caffeine in that diet Lipton tea stuff? I swear I can’t tell. Then I guess I will just drink water. I wish I liked milk…nah, maybe not. That stuff isn’t cheap.

Sodas gone. To boost my serotonin levels, I’m starting to eat spinach. Perhaps with a low dose of Zoloft plus the spinach, my brain can produce normal levels of serotonin. About a year ago, I foolishly requested my Zoloft to be lowered because I thought it was making me irritable. Silly move probably. I think it really did help with the social anxiety. I did things I had never done before. Now I don’t think I want to ask for a higher dose -that would mean 2 pills instead of 1- even though I probably should consider it. Maybe the spinach will work? Here’s hoping.

I don’t cook so of course I have to share pictures of my first attempt at cooking spinach. 😉 I cooked the following x2. 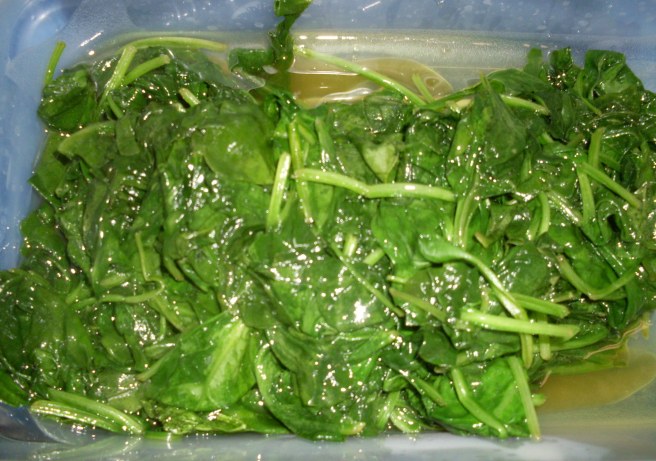 I cooked the biggest bag of spinach the store had and that is all I ended up with after it was cooked. I will definitely be buying more. I probably used too much olive oil (ya think??). I didn’t add anything for flavor because I forgot to buy anything.

I was so proud of myself for throwing away almost everything from my house. Clutter be gone! I threw away books (!!), clothes, shoes, handbags etc. I had already donated some of the books in really good shape. I probably could have donated some of my clothes but I knew that I didn’t want to go through them. I just trashed everything. It was easier that way. If I had to go through each thing and make a decision…LOL. I would still have stuff in the house right now.

This is really good because I’m not taking anything to my new apartment that I don’t need. So I’m starting off on December 15th clutter-free. YAY! I’m not a natural hoarder so I don’t think I will have a problem. Things only got bad at my house when I was so depressed that nothing mattered (year 3?). I brought the mail in and dumped it on the table everyday. Okay, sometimes on the floor. Whatever. Eventually that adds up. It wasn’t like I was buying stuff. It was just junk.

The worst thing about clutter for me was losing stuff. I would lose shampoo and end up buying more just because I couldn’t find it. NEVER AGAIN.

Speaking of moving…Oh g-d. At least I now feel confident that I actually have the apartment despite not signing a lease yet. I still wish I could at least see the lease. That’s all I wanted. I’m an anxious mess. I need to know everything possible. My budget is going to be sooooo tight. But I think I can do it. I’m too scared to really add it up but I have to know how much I can spend on groceries/toiletries each month.

I know this entry is all over the place (blame the lack of soda/caffeine). I still have to pack. I move in 9 days and I haven’t finished packing…mostly because I need most of the stuff I have with me. It is mostly work stuff. I can’t pack that until the last minute. This is going to be the weirdest move ever. I can’t think about it too much. Overwhelm. Overwhelm.

I wish all this was easier but I have to step up and step out on my own. I am capable. I have a few new goals I will implement on December 15. I might come up with a whole list and post it here.